What’s That Chattering Sound? The Truth about Chimney Swifts 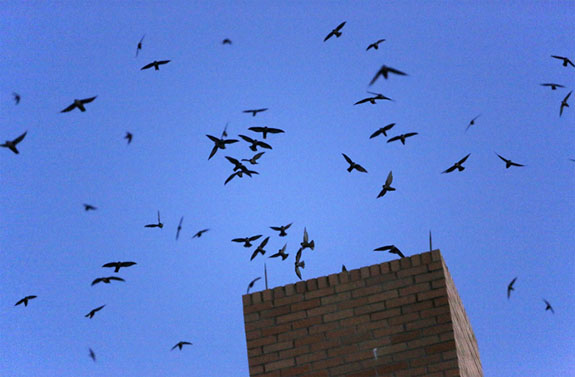 Have you ever tried to wrangle raccoons out of a chimney? Hopefully you haven’t had to do that, but for professional chimney sweeps it’s not an unusual thing. Raccoons, squirrels, bats, and birds are among the many different types of critters that find their way into your chimney. But, there’s one bird in particular that can be especially problematic – the chimney swift.

Often referred to as “a cigar with wings”, these birds are the only swifts that reside in eastern North America. Before Europeans settled in North America, chimney swifts roosted and nested in hollow trees. As progress marched on, these trees were cleared to create farm land, and later, cities were built. Developments during the Industrial Age, introduced chimneys into the environment, and eventually, the birds used them as a replacement to build their nests.

Chimney swifts have been in a long-term decline for the last 50 years. Since the mid-1960s, their population has dropped by 65 percent. Since chimney swifts are protected by federal law under the Migratory Bird Treaty Act, it’s illegal to remove or disturb chimney swifts, their nests, eggs, or young during the breeding season.

What You Should Do

So, what should you do if you discover that there are chimney swifts living in your chimney? One of the easiest and safest ways to keep chimney swifts out of your chimney is to have a chimney cap installed, especially if you have a metal-lined chimney. Not only will this preventative measure deter the swifts from nesting in your chimney, but will also keep the birds from becoming trapped if they do manage to get into the chimney.

Although you may feel that capping your chimney will deprive a chimney swift family of a place to roost, it’s important to note that there are many conservation groups building alternative habitats. For example, a 30-foot tower constructed at the Prairie Ridge Ecostation in Raleigh, North Carolina, provides a roosting place for 5,000 birds!

Concerned about critters in your chimney?

Contact Doctor Flue! Our team of expertly trained technicians can evaluate your situation, offer our recommendations, explain to you the process, and install a chimney cap. Give us a call us at (800) 438-3583 and request an appointment today!

This entry was posted in Chimney Caps, Chimney Inspection, Chimney Services. Bookmark the permalink. Follow any comments here with the RSS feed for this post. Both comments and trackbacks are currently closed.