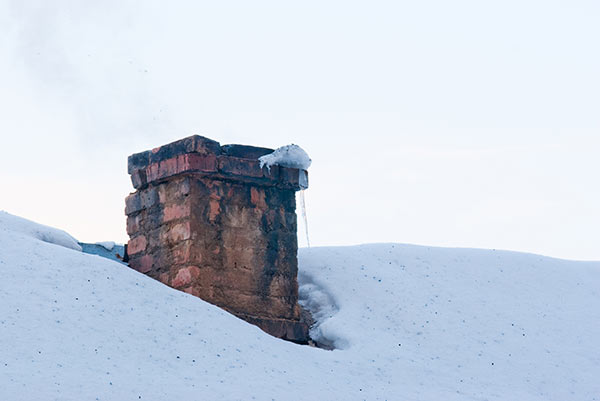 Your chimney is a necessary part of safely operating your fireplace. Without it, smoke and byproducts from combustion would have no place to go! But when you have a chimney blocked with debris, it can trap exhaust in your home and put your safety in jeopardy.

Every homeowner should know how to identify the signs of a chimney blockage and how to handle it. Read on to learn more to find out what you can do to keep your family safe from a blocked chimney.

How to Identify a Blocked Chimney

In many cases, a chimney blockage can be spotted by savvy homeowners. Especially when you have an active fire burning, you should frequently check your fireplace or stove for any unusual behavior that might indicate a problem. Here are some of the most likely symptoms of a blockage:

One of the most obvious signs of a blocked chimney is a smoky odor, particularly when you have a fire burning. During normal operation, the flue should draw smoke up and out of your home, dramatically limiting any smoky smell that otherwise might affect your home.

When the chimney has a blockage, however, that smoke can’t always escape. In addition to pushing a smoky odor into your home, this blockage can lead to bigger problems like fireplace backpuffing.

Debris Inside the Hearth

This is an obvious sign. If you see debris in your firebox or sticking out of the fireplace, chances are it fell through the chimney. That debris could indicate there’s more that didn’t make it all the way down. Even if your chimney isn’t blocked right now, debris shouldn’t enter your flue at all. Start looking at potential solutions to block further debris from finding its way in.

Frequent use of your chimney is guaranteed to lead to byproduct build up. While you can reduce the build up by burning properly seasoned wood, over time, it will lead to a soot-filled chimney.

If you start to notice high volumes of visible soot, it’s likely that there is also build up in places you can’t see. The only reliable way to confirm a blockage, especially deep in the flue, is with a video inspection performed by a professional chimney sweep.

Risks of a Chimney Blocked with Debris

Anything that impacts the effectiveness of your chimney increases the chances of some common risks:

Despite being designed for combustion, a chimney fire is one of the most dangerous events that can happen in your fireplace. Most chimney fires start due to creosote deposits that have built up in the flue. Over time, these deposits grow large and cause a very hot fire to ignite.

When the creosote ignites, it can cause severe damage – which can extend far beyond the chimney. Due to the high heat of chimney fires, they can ignite other combustibles near the masonry. Wooden support beams and other home building materials are at risk. Chimney fires also often crack and damage your masonry. That means a second or third chimney fire is much more likely and may cause damage or even burn down your home.

Another potential source of a chimney fire is debris like a bird’s nest falling inside. This can allow a fire to happen higher up in the chimney, igniting creosote deposits.

If your chimney can’t vent properly, the byproducts from combustion will need to find a new way to escape. The only other option is back into your home. One of these byproducts is deadly carbon monoxide.

Carbon monoxide is invisible, odorless and tasteless. It’s impossible to notice until you’re experiencing the symptoms of CO poisoning, which can be any of the following:

As the symptoms become more severe, it’s more difficult for you to escape from poisoning. For this reason, it’s critical to have carbon monoxide detectors installed in your home. You should have one near the fireplace, and others in common living areas – particularly in bedrooms and living rooms, to avoid the possibility of sleeping through a carbon monoxide incident.

Preventing Debris from Clogging Your Chimney

The best way to keep your chimney free of debris is to install a chimney cap. Every chimney should have a cap installed, even if you don’t use the fireplace or stove connected to it.

They keep your chimney, and thus your home, protected from a variety of invasive problems like:

While rain or debris can be a risk for your chimney, animal invaders can do real damage to your home. There are plenty of anecdotes of birds or racoons running wild in homes after sneaking in through open chimneys.

There are no negatives associated with chimney caps beyond the cost of installation. But the protection offered to your chimney and home far outweighs the initial costs. If you have a chimney without a cap, or if your chimney cap has been damaged, contact a chimney professional right away to look into a repair or replacement.

No matter what you do, it’s impossible to keep the interior of your chimney completely clean throughout the year. Even if you don’t use your chimney, it needs to be inspected and cleaned at least once annually.

While you may be able to identify obvious signs of damage or blockage, CSIA-certified chimney sweeps use a specialized camera to inspect the deepest reaches of your flue in close detail. Not only will this find evidence of blockage, they can even find potential signs of a chimney fire or other damage that may have lead to serious problems down the road.

This entry was posted in Chimney Inspection, Chimney Repair, Common Fireplace & Chimney Problems and tagged chimney damage, Chimney Inspection. Bookmark the permalink. Follow any comments here with the RSS feed for this post. Both comments and trackbacks are currently closed.