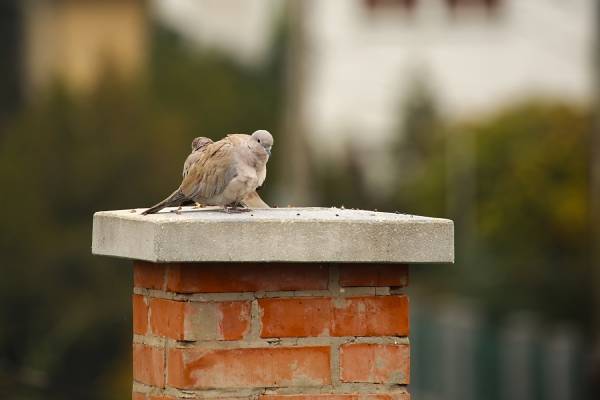 A chimney is a critical part of your home’s safety to vent out harmful smoke byproducts of a fire. Because it needs to have an open end, it creates a unique problem – animal invaders looking for refuge often find it by hiding inside the chimney. It’s common to find animals in chimneys, nesting or stuck inside the masonry.

To an animal, your chimney resembles a hollow tree, perfect for nest building.  Unfortunately, this is far from ideal for both you and the animal!  Thankfully Doctor Flue offers a solution:  Chimney Caps.  Read on to learn more about critters invading your chimney, and how to prevent it.

Raccoons are adept at climbing up and down chimneys, unlike most critters.  Raccoons often nest, or den, inside chimneys to raise offspring.  Raccoons' birthing season lasts from late March through June and, sometimes, into August.  If you have a raccoon den in your chimney, you will most likely hear noises at intervals throughout the day.

Never attempt to smoke out the raccoons!  Do not start a fire in your fireplace in an attempt to 'smoke out' the raccoons.  This is a common mistake of many homeowners, and often results in compound issues.  If a fire is started in the chimney, it may result in the death of one or more raccoons, often the babies. This creates a scenario where you are forced to deal with a dead animal.

You should also never seal them out.  Do not seal off your chimney once the large mother raccoon leaves.  Again, this will result in the death of the babies.  Live raccoons are easier to locate and remove than dead ones.

Raccoons are weaned from their mother at about six weeks of age, and will likely move from your chimney on their own.  But if you are eager to remove the raccoon family, please call a professional.  Do not attempt to do this on your own.  Raccoons, especially mother raccoons, can be vicious and are likely to cause injury if threatened.

Another common animal in chimney scenario we see all the time involve rats. While you may think of rats as animals that scurry low to the ground, they’re surprisingly agile at maneuvering over rooftops as well! If they’re looking for shelter, rats can easily find their way into your chimney through the top.

Like raccoons, it’s never a good idea to try and smoke out or seal off the rat. Because of their nature, rats often carry diseases or pathogens that can transmit to you quickly if you have to deal with a deceased rat due to smoke inhalation, starvation or other issues from you trying to handle the problem yourself.

Unlike raccoons, which easily climb in and out, birds and squirrels often are stuck inside chimneys.  You are likely to hear noises of distress coming from your chimney if a squirrel or bird is trapped.  These animals are likely looking for shelter, but cannot scale a chimney wall like a raccoon. Once they find their way inside, they won't be able to fly away.

Again, never smoke out squirrels or birds. It won't encourage them to leave, as they simply can't get out. Instead, call a professional to help.  It is much easier to remove a live animal than one that is dead!

Protect Against Moisture – Water in your chimney isn’t just an annoyance, it’s a potential hazard to the brick and mortar. Whether mold growth or direct weathering, brick that becomes damaged from moisture can expose your home to risks like fires due to heat escaping into spaces before it reaches the top of the flue.

Reduce Airflow Issues – Windy days that cause drafts can chill your home or leave your fireplace non-functional. Proper airflow is important for making the most of a fire, and a chimney cap helps stop air from building a draft down into the flue instead of going up and out of one.

Fight Back Against Debris – Windy days or tall trees around your home can also bring all types of debris such as twigs, leaves or even trash into your chimney! Not only can these be a hazard from directly increasing the heat on the masonry when you use your fireplace, it could even clog the flue and force smoke back into your home!

Most commonly, a chimney cap is constructed of galvanized metal, and can last from five to fifteen years. If your home doesn’t have an existing chimney cap, it’s important to look into getting one right away. For homes that already have them, they should be inspected as part of your regular chimney inspections. Over time, they can be damaged from weather or other issues – leaving your chimney exposed to critters of all types!

Schedule an Inspection of Your Chimney Today!

Our  CSIA Certified Chimney Sweeps can help you find the right new stove for your home and install it. Our technicians follow up-to-date safety standards and compliances to ensure your new appliance is effective and safe! Contact us today! We’ll get you set up right away so you can have peace of mind.