Fireplace Safety Tips: Things You Should Never Burn in a Fireplace 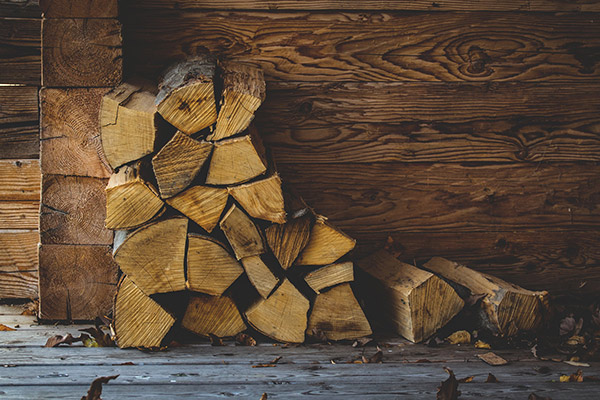 Your wood-burning fireplace is built for one thing: wood. It’s in the name! However, many use their fireplace as an easy way to get rid of boxes, bottles or other trash. Not only is this bad for your fireplace, it can lead to long-term health issues for anyone that breathes in the byproducts. Read through these fireplace safety tips on what not to burn and protect yourself from dangerous chemicals and chimney fires!

9 Things You Should Never Burn in a Fireplace

While it’s easy to ignite and may seem like a good way to help get a fire started, burning cardboard can be dangerous. Because cardboard is treated with chemicals and often contains inks, it can release them into the air when burned. You don’t want to breathe those in!

Additionally, cardboard is very lightweight and prone to floating. If a burning piece of cardboard escapes your fireplace, it could quickly start a fire on nearby combustibles. Or, more commonly, they can float up into your chimney and cause a chimney fire. Ultimately, there are too many risks in burning cardboard.

Despite being one of the most dangerous materials to burn, plastics are commonly burned in fireplaces and firepits. Whether for convenience or to save money, people all around the world burn plastics daily. While there are many types of plastics that can produce slightly different harmful byproducts, such as carbon monoxide, they are all equally dangerous.

Dioxin is an emission that comes from burning plastics like PVC. This toxic chemical is not only carcinogenic, but it can have other serious impacts – and can even be transferred from mother to child during pregnancy. Immediate exposure to burning plastic can lead to headaches, weakness, fatigue, and damage to your eyes or respiratory system. Additionally, the emissions can settle on crops or in water sources. When this happens, the chemicals accumulate and can be ingested later.

Burning plastic is dangerous for you, your neighbors and your community. Make sure to recycle any plastics you can, and keep them away from your fireplace or firepits.

Chromated copper arsenate was one of the most common preservatives in older treated wood. Arsenate is a compound made of arsenic acid. You don’t have to be a chemist to know arsenic is bad for you! When you burn older treated wood, you release this arsenic into the air, while some is also left behind in the ashes. Even modern treated wood contains harmful chemicals – though arsenate itself is less common. If that wasn’t enough to convince you, it’s also illegal to burn pressure-treated wood in every state.

Similarly, older painted woods contain other dangerous chemicals. Until the 1980s, paint often contained lead. Following that, paints began using mercury. While modern paints tend to be safer, they aren’t safe. Not only will burning any painted wood release the paint chemicals into the air, the paint acts as an accelerant and can burn through too quickly.

It’s not enough to stick to burning natural wood – you also need to make sure you’re burning the right kinds of wood. If you’ve collected a pile of driftwood, don’t use it in your fireplace! Because of its salt content, it can damage or corrode parts of your fireplace or your chimney liner. At hot temperatures, burning driftwood can also release carcinogens into the air. Even if your driftwood has been thoroughly dried, it’s not safe for use in a domestic fireplace.

If you were planning to add gasoline or grill fluid to your fireplace to kickstart your fires, you’ll want to reconsider. While these fire accelerants have their place in other applications, your fireplace and chimney weren’t designed to handle fires like that. Gasoline or kerosene can create flames that burn at an extremely high temperature and even flare up to burn high in your chimney. This can ignite creosote or other byproducts if you haven’t kept up with annual chimney cleanings.

Handling fire accelerants indoors can be extremely dangerous and put you at substantial risk for a fire from drips or misuse. They’re designed to be used with outdoor grills – not in a controlled, tight indoor environment.

Paper or Boxes with Colored Print

Like cardboard or painted wood, boxes and paper with colored print or other markings on them can come packed with chemicals. Here are a few examples of boxes you should never burn:

Another fireplace safety tip regarding these materials is to watch for dangerous fires. On top of the chemical risks, these materials tend to have a high surface-to-mass ratio. Unlike wood, which burns slowly over extended periods of time, paper and boxes will burn quickly. This can lead to tall flames that might ignite creosote in your chimney! If you still decide to burn paper in your fireplace, keep an eye out for a flame that’s burning too high.

It’s not an uncommon suggestion to use dryer lint as a fire-starter. It burns easily and can be obtained, essentially, for free. However, that doesn’t make it a good option for starting your fires. Dryer lint contains all sorts of chemicals – from dirt and dust that it collects, to byproducts from fabric, detergents and fabric softeners.

Modern Styrofoam doesn’t contain the chlorofluorocarbons that it used to. But that doesn’t mean it’s any safer to burn. Burning polystyrene releases a toxic styrene gas. It can have a significantly harmful effect on your nervous system if inhaled. The carbon black substance left behind from burned polystyrene can cause short-term irritation to your eyes and throat. If you frequently burn polystyrene, studies have shown an increase in lung scarring, bronchitis, and reduced lung capacity.

Just because the holidays end, doesn’t mean cold weather goes with it. You may be tempted to take your Christmas tree down and quickly dispose of it in your fireplace. After all, it’s a few feet of good firewood, right? Wrong! A fresh Christmas tree is full of sap. Not only will it burn poorly, as it hasn’t been properly dried, the sap can leave hazardous resins in your chimney. In extreme cases, these resins will lead to a dangerous chimney fire.

Your Fireplace Is Not an Incinerator

Fireplaces, stoves and furnaces are built and tested for safety. But these safety precautions assume that you’re using your wood-burning appliance as intended. When you burn a non-wood substance in your fireplace, you could be causing irreversible damage to you, your home and your fireplace. They can poison you, lead to corrosion and even dangerous chimney fires. Our most important fireplace safety tip: stick to burning dry, properly seasoned wood to enjoy a warm and safe fire.

If you burned something dangerous in your chimney, we can thoroughly clean and inspect your fireplace and chimney to identify any damage or safety concerns. Contact us today! We’ll get you set up right away so you can have peace of mind.

This entry was posted in Tips & Safety and tagged fireplace safety tips. Bookmark the permalink. Follow any comments here with the RSS feed for this post. Both comments and trackbacks are currently closed.