Help! There’s a Raccoon in the Chimney

Recently, the Doctor Flue team answered a service call from a homeowner in Birmingham, MI after she started hearing noises coming from her fireplace. Upon inspection, we discovered that noises were the result of not one, but two raccoons, making a home in her fireplace chimney! The raccoons were trying to open the damper to get inside the home. The Doctor Flue team used a smoke bomb to force the raccoons out of the chimney; solving the initial problem.

The job didn’t stop there! Later, we discovered that there was yet another raccoon living in her furnace chimney. The team used a deterrent in an attempt to get the raccoon to leave, but it only scared the little critter, and it crawled into a 5” connector pipe, where it got stuck. 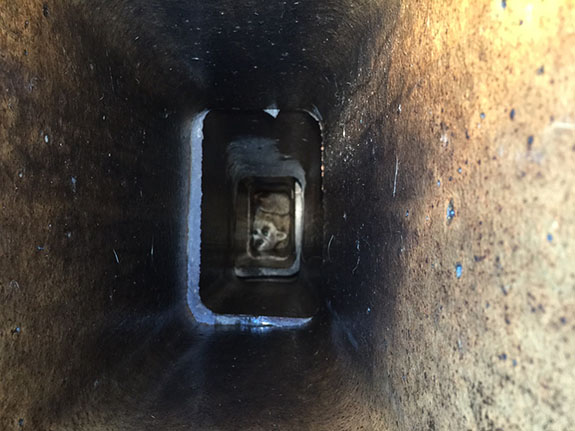 We set up a wire mesh fence around the furnace box and pushed the raccoon out through the chimney, where it escaped out of the top. Once all three raccoons left, we installed stainless steel chimney caps, so the homeowner will never have to face these bandits again.

Get your chimney cap with a lifetime warranty!

A chimney cap offers protection against all types of things, including animals, rain, and debris. Without a cap on your chimney, you may discover wild animals nesting in your chimney, which not only causes problems for you, but also, the animals.

Have a similar problem with your chimney? Contact Doctor Flue today!

This entry was posted in Chimney Caps. Bookmark the permalink. Follow any comments here with the RSS feed for this post. Both comments and trackbacks are currently closed.