The Chimney Sweep: A History

The first chimneys were built around 1200 in Britain, where they replaced an open fire in the middle of the home.  Over the next four hundred years, chimneys changed in location, size, and design. Read on to learn more about the history of chimneys and the chimney sweep.

The Chimney Sweep in the 17th Century

During the 17th century, coal replaced wood for fuel, which created creosote on the inside surface of the chimney flue.  A Master Sweep was called to clean the chimney.  The design of the chimney changed and became narrow and angular.  A usual chimney flue was 9 inches by 14 inches.

Since the Master Sweep could no longer climb into chimney flues, he would hire small boys, called "Climbing Boys", to brush clean the inside of a chimney flue.  They used small, hand-held brushes or metal scrapers to clean chimneys and remove tar build up.

It was not until 1875 that the Chimney Sweepers Act was passed, which required chimney sweepers to be "authorized by the police to carry on their businesses in the district" which provided legal means to enforce previous legislation. 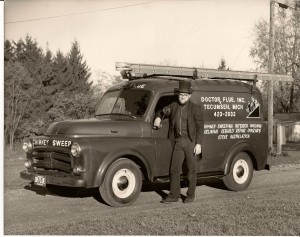 Chimney sweeps supposedly bring good luck throughout the world.  Here are a few:

The Chimney Sweep in Literature

Chimney Sweeps are common in literature.  Here are some examples:

Today chimney sweeps still clean chimneys.  But they do a lot more, too.  For example, the chimney sweeps at Doctor Flue, inc. also provide video inspections of your chimney, install fireplaces, and restore historical fireplaces as well.

Do you have a problem with your chimney?  Or are you interested in a new fireplace?

The CSIA-certified experts here at Doctor Flue offer chimney services and products in Michigan and Ohio and can inspect your chimney and help close it for the season. Contact us today! We’ll get you set up right away, so you can have peace of mind.

This entry was posted in Fun Stuff! and tagged chimney sweep, Chimney Sweepers, Chimneys History, Climbing Boys, History of Chimney Sweeps, Michigan Chimney Sweep. Bookmark the permalink. Follow any comments here with the RSS feed for this post. Both comments and trackbacks are currently closed.