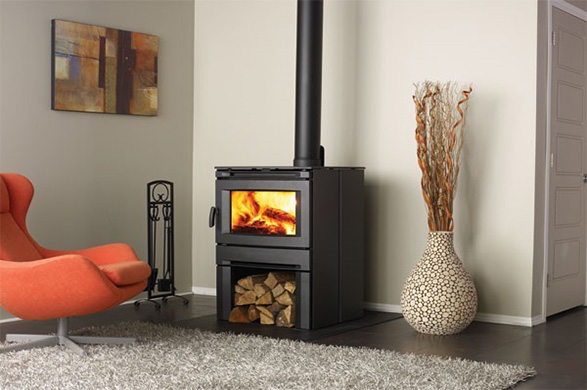 It wasn’t all that long ago that deciding on whether to add a fireplace or a wood-burning stove to your home was a matter of looks vs. money. Fireplaces offered visual appeal, but a wood-burning stove was a more efficient heating solution. Then designer wood burning stoves entered the market, and suddenly, the lines between aesthetics and efficiency became delightfully blurred.

A wood-burning stove is a heating appliance capable of burning wood fuel and wood-based “biomass fuel,” such as wood pellets. Traditionally, wood stoves are composed of a solid metal, closed fire chamber, a fire brick base, and an adjustable air control. The stove is connected to a chimney or flue by ventilating stove pipes, which fill with hot combustion gases when the stove is ignited.

Once a staple of the pre-central furnace days, wood burning stoves are gaining in popularity as a supplemental home heating source – and for good reason. They’re easy to use, inexpensive to fuel, and very efficient, compared to a traditional fireplace. A fireplace draws air from inside and outside your home, heats it, then sends it up the chimney – along with the smoke and carbon monoxide (CO). The only area which benefits from the warmth generated by a fireplace is typically only the room which houses it. And then that warmth can be dissipated by the air it draws in.

A wood burning stove, on the other hand, uses an internal combustion system which requires less drawn-in air, heats it efficiently, then distributes it throughout the house. According to EPA reports, a wood burning stove can be up to 50% more energy efficient and use 1/3 less wood than a traditional fireplace! Not only that, wood burning stoves contain all CO produced during the burning process, channeling it outside the house. Even the cleanest and most well-maintained fireplaces will backdraft a bit of CO back into the house, although that amount will be at safe and acceptable levels.

Once you’ve decided you want to go with a wood burning stove instead of a fireplace, you have another decision to make: catalytic stove or non-catalytic stove?

In a catalytic wood stove, smoky exhaust gases are passed through a catalyst-coated ceramic honeycomb buried deep inside the stove where they ignite and burn, producing a long, steady amount of heat. The catalytic element degrades over time and must be replaced; but with careful use, the catalyst can last more than six seasons. Catalytic stoves tend to by higher in efficiency and have longer burn times, but they also tend to be a bit pricier than non-catalytic models. They’re usually the choice for those who are looking for a wood stove to take over a large part of their heating costs.

As its name implies, a non-catalytic combustion doesn’t use a catalyst to produce and maintain the heat. Instead, it creates a good environment for combustion right in the firebox using firebox insulation, a baffle to divert gas flow, and pre-heated combustion air introduced through small holes all around the upper part of the firebox. Non-catalytic wood stoves are easier to operate and have an (arguably) better view of the flames. They also cost slightly less than catalytic models. But there will be more cleaning required because they leave more post-burn debris than their catalytic counterparts

Which is right for you depends on your needs, your taste, and your budget, but a wood stove/fireplace expert can help with your decision.

When someone says wood burning stove, the first thing that probably comes to mind is nondescript cast iron box in a log cabin. But that isn’t always the case, thanks to the advent of designer wood burning stoves.

While still suited for rustic décor, the sleek, the modern silhouette of a designer wood burning stove makes it at perfectly home in contemporary settings. Scandinavian designers like JØtul, Wittus, and HWAM are leading the way in turning the cast-iron boxes into sophisticated heating units that look more like pieces of art than appliances. And whether you choose a free-standing or a built-in model, you’ll get all the visual style and romance of a fireplace with the heat output of a traditional wood burning stove.

How Much Does a Designer Wood Burning Stove Cost?

Like most home-improvement projects, the cost of a designer wood burning stove has to be broken down into two parts: the cost of the unit itself and the cost of installation.

Unit Costs: Well-made traditional wood burning stoves typically cost between $1,000 and $4,000. For a designer unit, expect to pay $3,000 to $8,000 and up – roughly the same as installing a fireplace and hearth. But remember, unlike a fireplace, it will save you money on your home heating costs.

Installation: Installing a wood stove can be complicated. The stove must be tied into to an existing chimney – you cannot just vent the stove pipe through a window, wall or roof. It also has to be positioned with optimum clearance between the unit and a fire-proofed wall. And then there’s the floor. Wood burning stoves get hot – it’s what they’re designed to do. But too many people realized too late that they needed to protect the floor underneath (usually with ceramic tile or a heat-resistant mat) and ended up with a smoldering mess. Your best bet is to let a professional handle the installation. The cost of a wood burning stove installation varies depending on the complexity of the job, but it’s a small investment in the safety of your home and family.

If you’re considering adding a wood burning stove to your home, we offer a variety of models – including many designer styles – and we’re experts in installation. Contact us today!

This entry was posted in Wood Stoves. Bookmark the permalink. Follow any comments here with the RSS feed for this post. Both comments and trackbacks are currently closed.